Denise’s worst and last day on Earth began as most days, loving and providing for her two little boys.  January 17, 2008 was no different.  While cutting her oldest son’s hair, Noah age 2, on the back porch of their North Port, Florida home, a predator named Michael King was cruising the neighborhood looking for opportunities. Denise Amber Lee was a 21-year-old loving mother of two boys, whose husband worked three jobs so that Denise could stay home and raise their children. Denise was abducted from the Lees' rented home in North Port, Florida in the middle of the day. Somehow the intruder gained entry and control of Denise, who most likely saved her children's lives. Denise's father, Detective Rick Goff, was able to call on all area state, county and municipal law-enforcement agencies to search for Denise and her captor immediately following her abduction.

This was one of the most massive, cooperative search efforts that this area ever experienced.

In the hours that ensued, Denise fought mightily for her life. In her battle, she was able to use the captor's cell phone to call 9-1-1, an act she thought would save her life, just like we are taught as children. She was not the only one to call 9-1-1 that day regarding this crime. There were at least four other calls, one from her distraught husband and three from eyewitnesses. One witness gave the local sheriff's department an exact location of the crime happening right before her eyes. She stayed on the phone for more than nine minutes, identifying cross streets as she continued driving. Despite the fact that as many as four patrol cars were within a mile of the car in which Denise was fighting for her life, due to inefficiencies in the call center, none were dispatched. 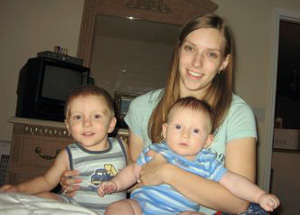 On the morning of January 19, 2008, a few heart-wrenching days after she went missing, her body was found. It is in memory of Denise and the tragedy that could have been prevented that this Foundation is formed. The Denise Amber Lee Foundation was founded by Denise’s loving husband, Nathan, who sought changes to a 9-1-1 system that failed her that day.  The Foundation is here so no other person, family, or community has to endure the pure hell of a similar event and that no other children have to endure a lifetime without the comfort and guidance of their loving mother.

We envision a time when a citizen's first call for help will be answered by a state-of-the-art 9-1-1 call center staffed with dedicated and highly trained professionals. A time when 9-1-1 will fail no-one.

The national attention garnered by this tragic case has allowed us to make considerable progress in the short time since Denise's death. Gulf Coast Community Foundation of Venice, the largest community foundation in Florida, has partnered with us to lend its considerable resources and influence to our cause. This heart-breaking story has been featured on Dateline NBC, The Today Show on NBC and ABC's 20/20. The Florida State Legislature was so moved by this story and testimony from Denise's father, Detective Rick Goff, that the bill passed unanimously and was named in Denise's honor.

God bless all the 9-1-1 professionals out there who care and are working so hard to keep us all safe. May God give them the strength and guidance needed to do their job to the best of their ability. Thank you for what you do!!!